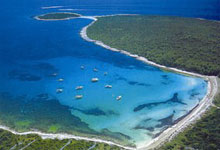 Croatia has a breathtaking wealth of architectural heritage. A thousand miles of coastline dotted with nearly 2,000 islands and islets — the best way to discover this magnificent country is by sea.

THE ISTRIAN COAST, Pula, Rovinj, a mix of Italian and Adriatic charm. Vineyards, medieval fortified towns and villages, and along the coast a multitude of charming little ports and the islands of Krk and Cres.

THE DALMATIAN COAST, the Kornati Islands form an archipelago of, islets, rocks and reefs with sparse vegetation. Currently there is no permanent habitation on the islands apart from a few houses occupied by fishermen or farmers in certain seasons. The Kornati islands have been declared a National Park. Further south, is the picturesque town of Trogir, while Split, in addition to being an administrative and commercial center is also an important tourist hub. Every year it attracts thousands of tourists who visit its monuments and participate in its cultural events. The most beautiful city in Croatia is undoubtedly Dubrovnik and remains one of the great sights the Mediterranean. This port city bears numerous testimonies to its rich history through its monuments and cobblestone streets, and is classified by UNESCO as a World Heritage Site.

WEATHER, the two main seasons are summer and winter, with autumn in October and spring in April being rather short transition seasons. During the summer months, the winds are light throughout the Adriatic, on average force two to three, and very rarely strong.